Hannibal Barca... one of the most brilliant military commanders in history.

Scipio Africanus... one of the greatest Generals in Roman history.

Hannibal Barca, of Carthage, is at war with mighty Rome...

Before the most horrific day in the history of war,
the catastrophic battle of Cannae...
there were other battles... 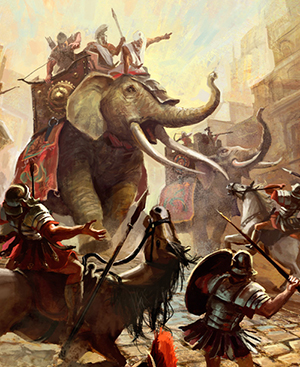 Hannibal's Carthaginian army crossed the Alps
with about 40,000 men and 37 elephants,
with the intention of invading Italy and destroying Rome.

His army was under constant attack by local mountain tribes.

Hannibal's army fought its way through the Alps
and succeeded in making it to northern Italy.

He lost thousands of soldiers and many of his elephants.

The first major battle was Trebia.

A river ran between Hannibal's camp and the Roman army sent to stop him.
The terrain surrounding the river was overgrown with bushes and plants.
Hannibal ordered 2000 of his men to hide among the bushes.

He sent out a small Carthaginian force to harass the Romans.
The Roman army responded as Hannibal wanted. They immediately marched toward Hannibal's army.
The lead soldiers met and fought a savage hand to hand duel.

Then... the Carthaginian soldiers hiding in the dense underbrush attacked the rear of the Roman army.
The Roman soldiers broke and ran.
Thousands were killed on the battlefield by Hannibal's forces and the elephants.
Many more drowned as they tried to cross the river.

Hannibal is pursued by the new Roman army sent to stop him.
The Roman commander is impatient and brass, filled with over confidence.
... Hannibal knows this.

Hannibal hides many soldiers in the forest next to the road leading by the lake.
He makes his camp in plain view of the Roman army.
He instructs camp fires to be lit kilometers past his camp, to give the
impression that his army is spread out and farther away from the advancing Roman army.

The Romans march by the lake in a single column.
Hannibal's Carthaginian army engages the lead troops.
Hannibal's hidden troops attack the flanks of the unsuspecting Romans.

It has been called the greatest ambush in military history.
30,000 Roman soldiers are killed or drowned in the lake.

Rome is stunned.
There is near panic in the streets.

Fabius decides that the best way to defeat Hannibal is to refuse open battle.

Both armies shadow each other.
Hannibal keeps trying to attack the Roman army but Fabius keeps to the rough higher elevations,
where Hannibal's superior cavalry were of little use.
Fabius harasses Hannibal and his Carthaginian army.

Psychological warfare is employed.
Hannibal's forces deliberately do not touch the estates of Fabius,
so that the Roman people would question and distrust him.

Fabius is criticized and discredited by the Roman Senate and people
for his methods of non-engagement with Hannibal.

Changes in tactics were made by the Romans, many of them based on the successes of Hannibal.
One of the changes made was that Roman soldiers now marched in columns of three.

The cat and mouse game continued, with neither side winning major battles...

The time had come to put an end to Hannibal.
Rome had suffered enough.
The end of Hannibal was near.

The Roman army met Hannibal's army in southeast Italy, at a place called...

Hannibal's Carthaginian army formed up in a crescent shape facing the Roman army.
The Romans attacked the center in overwhelming force.
The center gave way, with Hannibal's soldiers retreating.
The Romans pushed forward.

...This was Hannibal's plan.
The Roman army was fighting its way into a trap.

The sides of Hannibal's crescent closed in on the flanks (sides) of the Romans.

Meanwhile, Hannibal's cavalry defeated the Roman cavalry and attacked the rear of the Roman troops.

The Romans were packed together tightly. Too tightly.
Confusion and panic.

It is a horrifying sight.

40,000 to 50,000 Roman soldiers are slaughtered!
These were the worst casualties of any one day battle in history!

(I am hedging on the casualty figures. Many historians believe the numbers were far worse).

Rome on that day lost between a quarter and a third of the Senate.
They wanted to be present because they assumed it would be a great victory.

Hannibal would prey on Italy for another 13 years
and defeat army after army and kill general after general."

Since Hannibal had arrived in Italy...
20 percent of military age adults had been killed.

Young, confident, brilliant.
He had saved his father's life at an earlier, smaller battle with Hannibal's forces.

He had actually fought as a junior officer at Cannae, and was one of the few to escape.

His father was killed in a later battle with Hannibal's brother.

Rome was desperate.
Scipio offered to take command of a new army.
He was young but had proven his courage and he was allowed to take command.
His army went to Spain and immediately had success, taking on the Carthaginian allies of Hannibal.
Scipio treated his prisoners with humanity, trying to win the hearts and minds of the people.

The war continued, with neither side winning major battles.

In 204 B.C. Scipio, with an army raised and trained by himself,
crossed the sea to northern Africa to fight Numidia, allies of Carthage and Hannibal.

In a surprise attack, Scipio's army destroyed the enemy forces, killing an estimated 40,000.
Scipio dethroned the King of Numidia and helped another Prince to become the King.

The horsemen of Numidia had been the backbone of the excellent cavalry
that had helped Hannibal win many battles.
Now, they would fight for Rome.

The war had been in a stalemate for years.
After 15 years in Italy, the tide of battle had finally turned against Hannibal.

Carthage was in Northern Africa, across the Mediterranean Sea from Italy and Rome.

Scipio sails a Roman army... to Carthage itself!

Hannibal is ordered to return to defend his homeland.

The Battle of Zama! 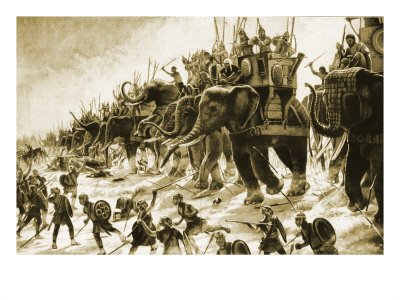 Scipio's cavalry overcomes the Carthaginian cavalry.
Hannibal unleashes his elephants, but Scipio was prepared for this.
His troops merely opened gaps in their lines
and the elephants ran harmlessly through the army.

Hannibal is defeated by his arch foe.
Hannibal loses 20,000 soldiers and 15,000 wounded.
Scipio loses only 1,500 soldiers, a complete reversal of the statistics of earlier battles.

Scipio is awarded the honorable title of Scipio Africanus,
after the country that he defeated.

But it's not over for Hannibal.

He becomes, not just a statesman in Carthage, but a good one.
He eliminates corruption and abuses to the point that the heavy tribute demanded by Rome could be dealt with.

Several years after Zama, Hannibal and Scipio have a conversation in Carthage.
The two men put aside their differences and talk like the two great military commanders that they were.
...Scipio is soundly criticized by the Romans.

Rome is outraged that Hannibal still exists and that Carthage is returning to prosperity.
Rome puts out a bounty on Hannibal's head and demands that he be surrendered to Rome.

Hannibal goes into exile, aligning himself with various other countries and armies.
He gives military advice and serves as Commander in some battles.
At one point he is credited with being the first person to throw cauldrons of poisonous snakes onto enemy vessels.

But, Hannibal is always on the run from the Romans...

Hannibal has been called a great military genius.
He caused more worry to Rome than any other enemy.
The Romans built statues of Hannibal to show that they had beaten such a worthy foe.

Scipio has been called a brilliant military commander.

The Romans, though they had been scared sick, never gave up.
They refused talk of surrender and rejected any negotiations for peace.

It was Rome's finest hour...

The Second Punic War was a war of trickery, traps and deception.

Scipio and the Romans learned from the defeats by Hannibal
and employed their own tricks and traps.

As horrifying as it was,
this was a fascinating war.

His aviation successes, Vegas casinos,
his power, his downfall... and his women.


And... Benedict Arnold
an American hero... and traitor