Before he fell in love with Peggy Shippen...
Before he met Major John Andre...
Benedict Arnold was a hero.

He had extraordinary courage. He led his men from the front.
He had horses shot out from under him.

His men respected him.

Other officers said, "Give Arnold a mission, and he'll complete it".

During the early days of the Revolutionary War, Arnold began his climb to fame,
and later, infamy, when he helped capture Fort Ticonderoga from the British.

His next feat was leading an American army into Canada and attempting to capture Quebec.
The march to Quebec was as difficult and demanding as can be imagined.

Congress referred to him as the American Hannibal. However, the Canada campaign became a disaster.
He was wounded in the leg by a musket ball. His army retreated back to the United States.

This may have been the beginning of his decision to betray his country.
He was angry and bitter at what he perceived to be Congress's failure to back him up.
He felt that the British in Canada would have been beaten
if Congress had provided the reinforcements that he felt would have made the difference.

But then, there was Saratoga.

The British army, under the command of General John Burgoyne, was marching into upper New York State.
John Burgoyne was one of the most colorful generals of the war. He was confident of victory.
He had bet a fellow officer that the Americans would be beaten within a year.

The Americans sent the Northern army to stop him.

Arnold was a general in the Northern Army, under the command of Horatio Gates.
Gates was jealous of his presence.

Benedict Arnold was considered at that time
to be the 'best fighting General in the American army'.

Gates and Arnold argued over how to stop the British army.
Gates wanted to defend.
Arnold wanted to attack.

The first battle of Saratoga took place. Arnold fought like he was 'inspired by the fury of a demon'.
Neither side won. He and Gates continued to argue.

Arnold asked to be released to join George Washington's army. It was granted.
But Arnold had the respect of the officers.
They signed a petition, asking that he stay on. He did.

Gates was embarrassed and angered over his officers backing up Arnold.
After another angry argument, Gates relieved Arnold of his command, and ordered him to be confined to his tent.

The second battle of Saratoga was in danger of a stalemate.
The momentum could go either way...

Benedict Arnold got on his horse!

With no command or authority, he rallied the soldiers.
He rode his horse in front of the American troops, inspiring them.

The battle of Saratoga was won by the American Continental army, but Arnold was wounded.
He was hit in the leg by a musket ball, and his horse was killed.
The horse fell on him, crushing his leg.
He would walk with a limp and a cane for the rest of his life.

John Burgoyne surrendered, and later wrote a fellow officer,
"The reason I lost at Saratoga was because of Benedict Arnold".

The victory became the turning point in the revolution.

Arnold spent a year recuperating from his injury.
George Washington assigned him to be the Military Commander of Philadelphia.
Arnold entered a political hotbed.
He may have tried to appease the 'loyalists' in Philadelphia,
in hopes that they would openly join the American cause.

Congress accused him of corruption.
One of the charges was using military wagons to transport personal goods.
There were accusations that he had become obsessed with making money to support an extravagant life style.
In truth, he probably was guilty of trying to make money on the side.

He was becoming bitter...

Benedict Arnold looked across the room and saw...
Peggy Shippen.

Arnold fell in love...
He began to court her.

Peggy had a good friend.
British Major John Andre was an extremely popular man. Everybody liked this guy.
He was good looking, fluent in a number of languages,
and he could sing, paint and write poetry.

He and Peggy were possibly lovers... 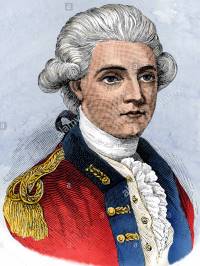 Peggy and Benedict fell in love and were married.
She probably told Major Andre how unhappy Arnold was.
John Andre was in charge of the British spy network in America.

We'll never know just when Benedict Arnold decided to betray America.
When was it that Major John Andre and Peggy put the thought in Arnold's mind?

She later admitted that she had helped sway him.

The British offered him a Generalship and 20,000 Pounds Sterling,
(about one million dollars in today's money),
to turn over the very important American fort, West Point.

He asked George Washington to be appointed Commander of West Point. Washington agreed.

However, the plot fell apart when Major Andre was caught with the secret plans.
Arnold fled to a British Ship.
Major John Andre... was hanged, as a spy.

A very angry George Washington
became obsessed with the idea of capturing and hanging Arnold.

Arnold was made a British brigadier general
and actually led British armies against the Americans.
He was ruthless...

When British General Cornwallis was defeated at Yorktown and the war essentially over,
Arnold accompanied him back to Britain.


For over 200 years, historians have wondered, why did Benedict Arnold do it?

He had begun the war as a fairly wealthy merchantman. He had spent his money on the revolution.
He was angry about others being given the rewards and respect that he felt should be his.
Under the weight of his anger and pride, he crumbled.

Perhaps it's too easy to explain away a traitor's reasoning.
Perhaps... it's impossible.

After the war, Arnold lived in Britain, with Peggy and their children.
While he had a nice pension,
he was never given the full amount of money that had been promised him,
since everything had gone so badly.

He was never accepted by the British, as they felt, 'once a traitor, always a traitor'.
Also, Major John Andre had been very popular and Arnold was blamed for his death.

He died in bitterness at the age of 60.

In defense of Peggy Shippen, she was a devoted wife and mother for the rest of her life.

If Benedict Arnold had died at Saratoga,
he would be remembered as an American hero.

But he lived... to become a traitor.


His aviation successes, Vegas casinos,
his power, his downfall... and his women.

Fletcher Christian was not a hero...
Mutiny on the Bounty