Before the dawn of time... An advanced civilization. 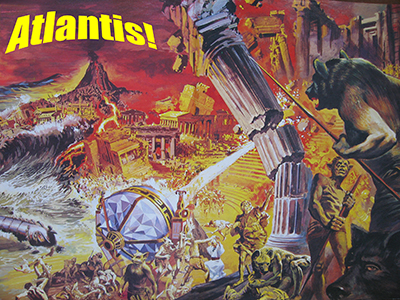 It is said that Cleopatra looked with horror
at the burning of the library in Alexandria.

The library at Alexandria held all the knowledge of the past.

Who built the Sphinx?

Did an advanced civilization exist many thousands of years before the Egyptian civilization?

Egyptian priests told of an advanced civilization,
thousands of years before recorded history...

Eventually, many years later, around four hundred years BC,
the Greek philosopher, Plato, wrote a story of it.
That's how the 'modern' world rediscovered the story.

It was one of the largest explosions in the history of the world!

Some people think that the Greek Island of Santorini... was Atlantis.

It was destroyed thousands of years ago when its volcano exploded.
The Island was buried in lava.

We now know that the people there had an advanced civilization, of laws and culture.

They didn't have television and flying machines.
That description of Atlantis came from the 'sleeping prophet', Edgar Cayce.
But, Santorini was considered to be an advanced civilization.


Of course, the story of Atlantis has come to us almost as an afterthought, as legend.

Is it possible that an advanced civilization could have existed before the dawn of time?

Of course it is.

In the third century BC, Greek engineer Ctesibius, discovered steam power.
To be sure, his contraption was used to entertain and amuse friends.
However, one of his pupils used the power of steam to open and close a door.
But, apparently, no one asked if this steam power could be used to move carts, or boats.

My point is, the industrial revolution could have happened 1500 years earlier!

There are a number of people who believe that Egypt's Great Sphinx, right near the Giza pyramids,
was actually carved thousands of years earlier than what history has told us.

The experts have said that an unknown, technologically advanced civilization,
thousands of years before the Egyptians is impossible,
because no evidence of its existence has ever been found.

One thousand years after the end of human beings...

all buildings and structures, other than the Pyramids and Mount Rushmore,
will have crumbled and disappeared.
(Automobile tires will last much longer than the car).

Forests will stand where a city once stood.

Once again, is it possible that an advanced civilization,
an Atlantis,
could have existed before the dawn of time?
The answer is yes.

An advanced civilization,
lost to time and history...

Fletcher Christian was not a hero...
Mutiny on the Bounty

Amazon
His aviation successes, Vegas casinos,
his power, his downfall... and his women. 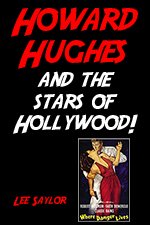 Howard Hughes and the Stars of Hollywood